More a project is simple,
More it may become monumental.
But, it is not because it is simple, that it will be simple to bring to light. 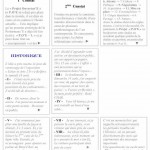 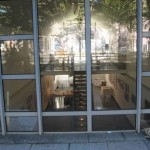 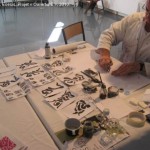 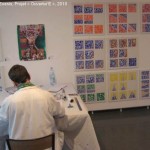 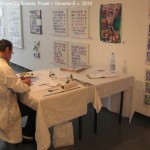 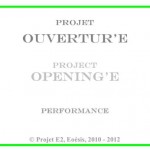 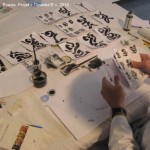 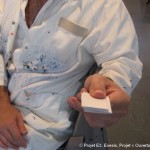 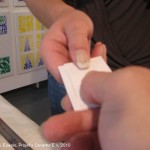 II – 2. 2nd Observation: at the heart of contemporary art

1. The day of a varnishing

2. Draw in public and offer the drawing

3. The portable studio in the gallery

6. Skip the map – Act of Resistance

15. The opening of a chess game

So, within the framework of the ( P.O’ E) several arguments or statements of facts should be highlighted.

It is an important point, because it implies that a first prototype of the performance was already been done (tested)), « Project Opening’E » (« P.O’ E – 1 ») So I can extract informations, conclusions on the five days of the performance.

II – 2nd Observation: at the heart of contemporary art

As can be seen, the performance moves down in a disconcerting way in the heart of several problems of the contemporary art. There is not question here to develop all these problems, they will be simply quoted, for the moment.

The issues in question are available in two (or more) levels, first at a general level : What is the role of contemporary art and a piece of art ? What is the role and place of an artist ? On the other hand, at a particular level, it is the underlying relationships in the context of concrete exhibitions of artistic pieces (drawing, painting, photography, volume, etc..)

The reports include, among others, the following schematic chain, which we call the « Chaîn’E » and which we arrange in column :

Thus, the « Chaîn’E » is (almost) unchanging and obeys relatively strict rules, it is a “tradition” accepted by society, it provides logical and reasonable criteria. This is the law of the market. Yet exactly, the « Project Opening’E » is going to upset this permanent « Chaîn’E », on one hand by deleting some points of the « Chaîn’E », particularly points 6, 9 and 11 ; on the other hand, in “charging emotionally” points 8, 10, 12 and 14.

The following pages will illustrate my point.

1. The day of a varnishing

I sat near my work.
People passed by by-passing me …

I decided to draw …
I immediately began a drawing.
But, I did not manage to finish it.
I was inhaled by the ambient excitement.

2. Draw in public and offer the drawing

Of return,
In the evening.

I thought for a moment of this small action :
Draw in public.

After all,
I made what I usually make.

I decided to expand this action.
To give him breath.
To mix places.
To appropriate them.

3. The portable studio in the gallery

The next day, August 15,
I took upon me,
in my pocket
twenty P.C.
pens, pencils,
adhesive paper,
and a book of poetry:
“Fury and Mystery”
from my favorite poet :
René Char.

I drew by taking care,
to leavz the third fret of the second line empty.

Most often, it was a “Character’E” filiform
who had the feet on the ground,
and hands in the air.
[What I would call later: A cosmic Personnag’E.]
I surrounded the character by heteroclite elements,
relatively complex
[What I call today :
The weight of the earth.]

Then
I managed to add (See Image 5.)
A poem by René Char,
A serial number and date of execution …

6. Skip the map – Act of Resistance

I turned on my chair,
and I passed the folded card,
to a visitor (See Image 7.)
who was taken aback.
I see on his face,
at the same time,
a smile and a astonishment.
I do not remember very well, in order, what I said: « It is a testament of the generosity of art. It is … an act of resistance. »

Of all which precedes,
I draw from fascinating conclusions, and full of promise.
We shall return there.

But the most interesting thing,
It is the moment that I “deliver the word” (in E) (See Image 8.)
to a person who is near me.

This is a highlight,
Which reminds me,
subjectively
Retrospectively.
The troubled periods of the History,,
Where we passed,
Discreetly,
Words which expressed important messages.
A question of life or death …

I was absent the Monday the 16th and Wednesday, August 18.

Will be always,
As underlined it André Breton,
“A magical moment”
and I add,
for my part,
rare, strong,
in a word,
cosmic.

It was one moment
who came to disturb
the apparent peace of the place,
and visitor.

Which risks to appear
to the eyes of some
“swelling”.

Yet
anticipating,
this word is, after all,
the essence of “Project E”
its ultimate destination,
its permanent orientation.
The cosmic order.
It is both the goal and the engine.
[It is in fact, an Opening to the cosmic.]

In addition,
I consider drawing (painting or other)
as an adventure
of re-cognition,
a cosmic journey.

In summary, the cosmic opposes to the ground …

It contributes to add
an additional quality,
with the density of work.

In fact,
the visitors were not looking simply
the work of an artist,
but also
and simultaneously,
the artist at work.

Similarly,
It should also be noted,
another interesting twist,
I was not present at the exhibition,
as an exhibitor
Pending a possible transaction,
(everyone recognizes to be a situation
sometimes dull and sluggish …)

I attended the exhibition thus,
as a performer.
I was not in the attitude
of who waits,
but in which who “disturb”,
poetically spontaneously
and in a short way the serenity of the places.

I would reconsider this matter,
because, obviously,
the reaction of the visitors is fascinating.

Two things remain to be clarified:
80% of visitors
are people participating in the championship of France Chess,
a population that ranges from 11 to 70 years.

15. The opening of a chess game

I have thus
adapted the project to the tournament,
This explains the choice of title: “Opening’E”
Because the course of a chess game is divided into three phases :
The opening, the middlegame and the endgame.

An Opening is the group of initial moves, in which
the player starts to open his game
by deploying his pieces.
Opening announced immediately,
a certain strategy,
that the adversary takes into account,
and reacts, while anticipating with variables…

“An act is virgin, even repeated. “René Char.

The suite is in progress.