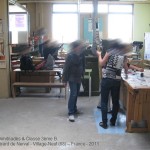 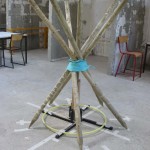 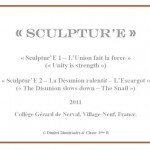 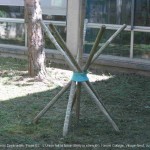 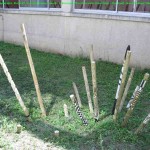 The entry of the college Gérard de Nerval has an original characteristic. It is an enormous hallway (a prodromos) rectangular and longitudinal that has on both sides, almost in a symmetric way, in mirror, two open-air atria, but closed with big plate glass windows, inaccessible to the pupils. (Cf. Image 1.)

The idea is going to germinate following several events:

1. I met in the access of a forest, piled up tree trunks the one on the other. I began to imagine the potential of what we can make with this “treasure”;
2. Than, I had toothpicks in the hand, I started to manipulate them, and as a result, I saw again in parallel the image of the tree trunks. I gathered toothpicks by turning them “harmoniously” in the center. It is the project «  Union is strength »”;
3. The direction of the college was seduced by the project. We placed an order of 12 posts of vineyards, logs of pine, 10 cm. of diameter and 200 cm. of length. The pupils had to sculpt “freely” the logs. A log for two pupils; (Cf. Image 3.)
4. After some working sessions, I noted that there was a great difference between a toothpick and a log (the eternal question of the scale of values), and that it was almost impossible to make the project with 12 logs (maximum 6, like presents it the image);  ;(Cf. Image 4.)
5. At this point in time I had the idea to make two different sculptures which call out to one another and which complement each other. The first one it is «   Union is strength » (Cf. Image 8.) And the second one « The Disunion slows down, or the Snail ». (Cf. Image 9.)