(*) There is a witty remark : « Point à la ligne » (“new paragraph”) is a French expression which indicates the “end of a sentence and assert that it has nothing more to say on the current subject there, and that we move on . (Dictionary Reverso.) “(Or, indeed, the” something else ” it is, the work in the Radbühne.) And the word “Pont” (“bridge”), means “a construction allowing to overcome an obstacle, a stream. (Hachette Dictionary) So, the expression becomes “bridge to line”.)

(**) A second pun, I wrote “effect-mother” for “short-lived”, “ephemeral” (which lasts only a day.- D. Hachette), but “Effect mother” also has a luminous intensity …

The origin of the installation

The title of the installation: « Po(i)nt à la ligne » 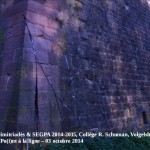 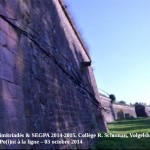 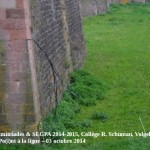 From the beginning, I was fascinated by the monumentality of the fortified Tower : the Radbühne. I wanted to make an intervention on the tower itself, its situation, its location, its position, its relationship with the fortifications.

I was very busy with the installation of the collection inside the Radbühne, and therefore I do not have time to take care of an outdoor installation.

But there was a relationship that began to prevail in my mind : The fortified tower which should give, through art, a force to the public …

As always, it took an adjustment time and especially observation, to see how the audience reacts towards the Tower.

The origin of the installation:

I had appointments with the SEGPA’s pupils [1], of the Robert Schuman College at Volgelsheim (68600, Alsace, France). Basically, I had to intervene around the « Projet « E’ye : What is Art ? » Version II – 1» But I preferred to begin something new and to put the pupils in a new unusual and enriching position.

I also wanted to show to the pupils that it is possible to make “things” simply but which have new and surprising perspectives.

However, I had to make some checks and see the feasibility of the project.

I so started, on Thursday, October 2nd, to test my materiel and to see its resistance depending on the movement of the wind …

The small experience was convincing because I obtained the effects for which I expected … (See Image 1.)

The next day I received the visit of the sympathetic pupils of the SEGPA (2 groups of 40 pupils with 6 teachers) which was very enthusiastic at the idea of beginning a new experience. (See Images 3 & 4.)

It was an unforgettable moments because in a short time, a work that is both lightweight and monumental emerged. On this matter, there will be a lot to say, I note the following facts : the change of the point of view, the perspective, the creation of long, visible lines of flight of more than 90 meters, the effect of vibration with the wind, the movements (the writing) of lines, the work was done without any anchorage point (without nails), the line music … (See Images 5 to 15.)

The title of the installation: « Po(i)nt à la ligne »

At the same time as the work of the installation, I was thinking about a poetic title which considers all the obtained effects. But I could not find an attractive title. And towards the end of the evening, I found a title which is always a big moment : « Po(i)nt à la ligne » … (Which becomes in a sense a whole program… )

I was pleasantly surprised to see that the work has to spend the night : on 8 lines stretched, only one has been “torn away” … I could in this way work on the continuation (Give “wings” to the tower !)

This day, a surprise was waiting for me, the work was completely extracted by invisible hands. We should not forget that the work was within the reach of persons which passed on the bridge. (It is at the same moment a quality and an inconvenience of the work …) (See Images 19 & 20.)

The fate wanted that two pupils of the school, Tifanny J. and Océane T. rose to see if the installation was still holding … Noticing the damages, they were kind to repeat the experience, so we re-tensioned seven new lines … I would like to thank the two pupils quoted for their nice collaboration … (See Images 21 to 25.)

In the morning, the work was still present…

[1] SEGPA : Section of Adapted General and Professional Education. I warmly thank the Director of SEGPA, Pierre Biry and the teaching team.